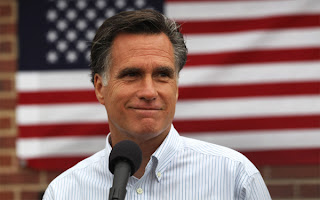 A Las Vegas "odds maker" gives his reasons for big win by Romney in November. I think you'll agree this is an interesting analysis:****

Most political predictions are made by biased pollsters, pundits, or prognosticators who are either rooting for Republicans or Democrats. I am neither.****

I am a former Libertarian Vice Presidential nominee, and a well-known Vegas odds maker with one of the most accurate records of predicting political races.****

But as an odds maker with a pretty remarkable track record of picking political races, I play no favorites. I simply use common sense to call them as I see them. Back in late December I released my New Year's Predictions.****

#1. I predicted back then-before a single GOP primary had been held, with Romney trailing for months to almost every GOP competitor from Rick Perry to Herman Cain to Newt - that Romney would easily rout his competition to win the GOP nomination by a landslide.****

#2. I also predicted that the Presidential race between Obama and Romney would be very close until election day. But that on election day Romney would win by a landslide similar to Reagan-Carter in 1980. Understanding history, today I am even more convinced of a resounding Romney victory. 32 years ago at this moment in time, Reagan was losing by 9 points to Carter. Romney is right now running even in polls.****

#3. So why do most pollsters give Obama the edge? First, most pollsters are missing one ingredient- common sense. Here is my gut instinct. Not one American who voted for McCain 4 years ago will switch to Obama. Not one in all the land. But many millions of people who voted for an unknown Obama 4 years ago are angry, disillusioned, turned off, or scared about the future. Voters know Obama now - and that is a bad harbinger.****

Now to an analysis of the voting blocks that matter in U.S. politics:****

#4. Black voters. Obama has nowhere to go but down among this group. His endorsement of gay marriage has alienated many black church-going Christians. He may get 88% of their vote instead of the 96% he got in 2008. This is not good news for Obama.****

#5. Jewish voters. Obama has been weak in his support of Israel. Many Jewish voters and big donors are angry and disappointed. I predict Obama's Jewish support drops from 78% in 2008 to the low 60's. This is not good news for Obama.****

#6. Youth voters. Obama's biggest and most enthusiastic believers from 4 years ago have graduated into a job market from hell. Young people are disillusioned,frightened,and broke-a bad combination. The enthusiasm is long gone. Turnout will be much lower among young voters, as will actual voting percentages. This not good news for Obama.****

#7. Catholic voters. Obama won a majority of Catholics in 2008. That won't happen again. Out of desperation to please women, Obama went to war with the Catholic Church over contraception. Now he is being sued by the Catholic Church.Majority lost. This is not good news for Obama.****

#8. Small Business owners. Because I ran for Vice President last time around, and I'm a small businessman myself, I know literally thousands of small business owners. At least 40% of them in my circle of friends, fans and supporters voted for Obama 4 years ago to give someone different a chance. As I warned them that he would pursue a war on capitalism and demonize anyone who owned a business...that he'd support unions over the private sector in a big way...that he'd overwhelm the economy with spending and debt. My friends didn't listen. Four years later, I can't find one person in my circle of small business owner friends voting for Obama, Not one. This is not good news for Obama.****

#9. Blue collar working class whites. Do I need to say a thing? White working class voters are about as happy with Obama as Boston Red Sox fans feel about the New York Yankees. This is not good news for Obama.****

#10. Suburban moms. The issue isn't contraception, it's having a job to pay for contraception. Obama's economy frightens these moms. They are worried about putting food on the table. They fear for their children's future. This is not good news for Obama.****

#11. Military Veterans. McCain won this group by 10 points. Romney is winning by 24 points. The more our military vets got to see of Obama, the more they disliked him. This is not good news for Obama.****

Will anyone in America wake up on election day saying, I didn't vote for Obama 4 years ago, but he's done such a fantastic job, I can't wait to vote for him today.****

Does anyone feel that a vote for Obama makes their job more secure? Forget the polls. My gut instincts as a Vegas odds maker and common sense small businessman tell me this will be a historic landslide and a world-class repudiation of Obama's radical and risky socialist agenda. It's Reagan-Carter all over again.****

But I'll give Obama credit for one thing- he is living proof that familiarity breeds contempt.****